This week saw huge progress on the house. While it may look like complete destruction from the images, that is a good thing! The house is still standing! We are still at demolition stage but before the builders could remove anymore from the back of the house, they needed to support the entire house using two large steel beams. One was inserted in the back wall from inside the house and another was inserted outside so they basically lie side by side now. According to Niall (our builder), everyone was instructed not to sneeze things were that delicate the day the first beam went in! You will see from the next few photos how delicate the back wall of the house actually was. It looks like a pile of rubble and when I paid a visit to the house on Friday, I was genuinely shocked at it’s poor condition.

The wall had to be supported by timber wedges and the repacked with cement and bricks. After this was completed, the builders were able to insert the second beam outside. The condition of the walls was something we could never have foreseen but we are really glad we are taking the house back to the brick walls and starting afresh. You really don’t know what condition the house was in until you start to rip stuff out. This wall looks so much better now.

The back of the house looked rough to say the least, but now it is finally structurally sound and more progress can be made. The old back wall downstairs was removed opening up the ground floor. With the old extension gone and the downstairs opened up, it has really helped us imagine what kind of floor space we will have to work with in the new living area. In the photo above you can see a tree on the right hand side of the photo. This was actually growing into the back of the house! See photo below. Needless to say this had to be removed!

A mini digger was hired and brought in through the house. The house is a mid terrace so we have no side access and to the rear of the house is the car park for Mountjoy Garda Station. The simplest thing was to remove the old staircase (don’t worry, it is in safe keeping) and bring the mini digger in the front door and down the stairs. As you do.

The logistics of getting the digger in would have totally stressed me out, which is why we are very glad to have a great project manager to worry about this stuff for us. It means we can distract ourselves with things like tiles, baskets for logs and console tables 🙂 The digger appears to be doing the job anyway. The garden is starting to really open up. We intend to knock the old sheds while we are clearing the site. It makes the most sense to do it now rather than having to do it a few years down the line when the house is finished.

The next big job is removing all the rubble from the garden. This will be done via the back of the house. A large truck with a grab on the front will pick up everything over the wall. That’s the plan anyway. Until then, I may distract myself with Farrow and Ball colour charts! 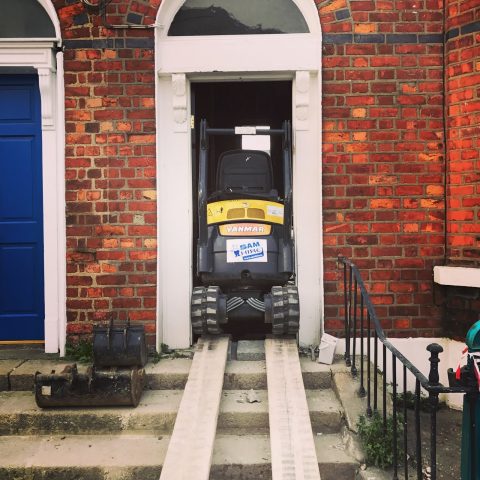 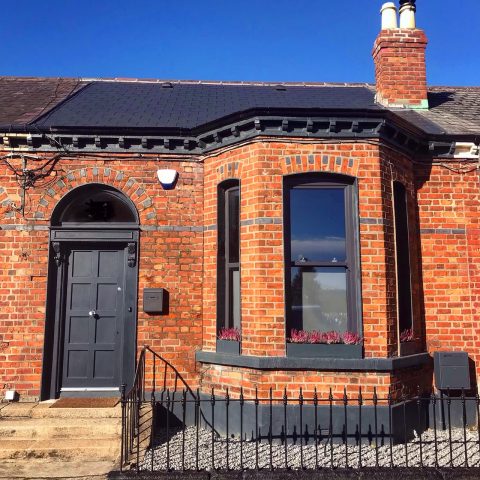